As part of my interest for Vector Graphics technologies, I had look at the Freeform Vector Graphics (FVG) technology proposed by Microsoft Research. After all, it differs from SVG only by one letter.

The paper describing the technology is available here. A video presenting the approach is also provided by the authors here. The approach is in general an extension or alternative to the work on Diffusion Curves. It enables the control of the interpolation of colors between diffusion curves (or points), with a higher order of smoothness if necessary.

This post reports on my understanding of the method and of its implementation, focusing on the use of the software and on some aspects not dealt with in the paper and is intended for people who have already a good understanding of the paper. If you notice any mistake, if it is unclear or if you disagree, please leave a comment.

I started by downloading the software. The installation of the software on my laptop (Win 7 pro, 64 bits) went well but the software was simply not running, and did not display any error message. Thanks to Mark Finch (the main author), I saw that the system log indicated an error of type 0xE0434352 in KernelBase.dll. Trying on my desktop, I had more visible/useful error messages such as System.IO.FileNotFoundException and  System.FormatException. The last one led me to changing the regional settings to English as described here. And then, it worked, even on my laptop.

Once the software starts, it shows the following screen. The controls to author an FVG image are provided on the left and at the top. The real-time result of the authoring is given in the bottom right part.

The controls allow you, among other actions, to add new or modify existing points or curves, to set/modify the color, to zoom or pan on the image, etc.

One remarkable aspect that I discovered using  the software and that is not mentioned in the  paper is the color space. The software uses the HSBA space, whereas the paper only talks about 4 channels, without mentioning if it is RGBA, sRGBA, or others.

A dropdown list proposes to select the curve type among the basic types: Value, Tear, Curve, Slope and Isogram; or among many more complex types. Not that the type “Isogram” is called in the paper “Contour” (with the same meaning according to Wikipedia).

Note also that the list distinguishes the Core types from the Extended types but apparently some Compound Curves (as defined in the paper) are also part of the Core types, such as “VS” (Value-Slope), “VC” (Value-Crease), or “T,V” (Tear, offset, Value).  I can’t see why “VS” would be more a Core type than “VT”, but that’s not really important.

Also the Null type is an extended type and is abbreviated with the letter N, which is a bit confusing as the paper uses N for Contour (Isogram). The Null curve does not seem to have any effect on the rendering. For instance, it is unclear why a “V,N,V” curve is not replaced by a “V,V”.

Here is a review of the core curve types: 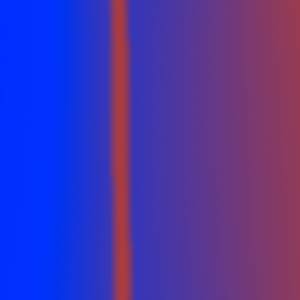 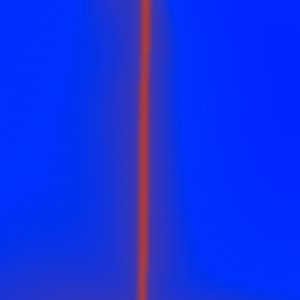 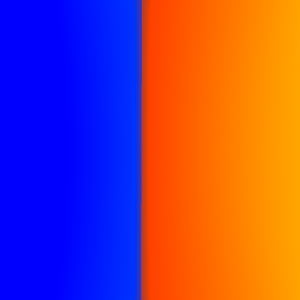 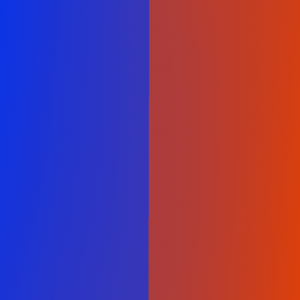 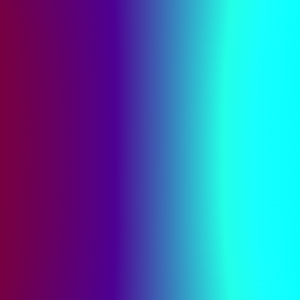 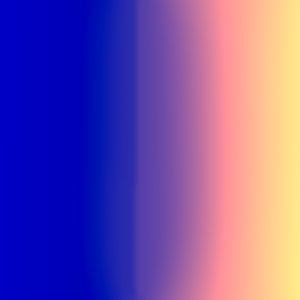 The list of extended types for compound curves is very long and I won’t detail all of them here. I’ll let you experiment with it if you want.

The software gives another list to set the type of a feature point, with 5 values: Null, Value, Critical, CriticalValue, Crease and CreaseValue. The published paper only talks about the Value and Critical type. One can guess that the Null type is not used during rendering, and that the CriticalValue type combines the Critical and Value type. The Crease type is probably the equivalent of a Crease curve but shrunk down to a point, i.e. that it removes the Dxx, Dyy, and Dxy penalties on the surrounding pixels, and the CreaseValue a combination of this Crease type with a Value type.

The user interface has lots of other controls, which are not intended for the end user, but where interesting things happen. The upper controls enable the author to load or save the content, to modify curves (weld, smooth), etc; but the most interesting control is the “Adv” button, which shows the following check boxes. 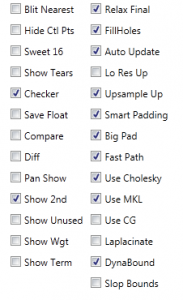 According to my experiments, some are not very important as they control only some elements of the UI and not the method used to produce the image. Some others are more important. I’ll present here their effects. 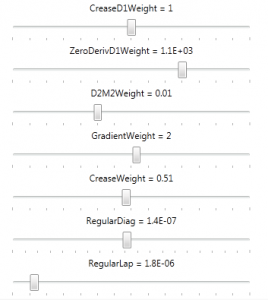 The upper sliders seems to control the weights used to produce the image, as described in Equation 1 in the paper. However, the weights are named differently from the paper. In the paper, they are called w0, w1, w2, wp (one for value point and one for value curves), wt (one for slope and contour curves and one for crease curves). After different attempts, my understanding is that: 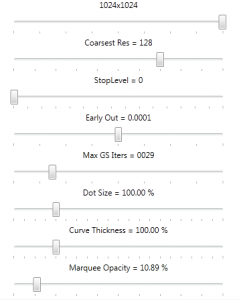 Back to the main settings: 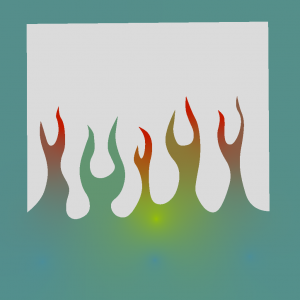 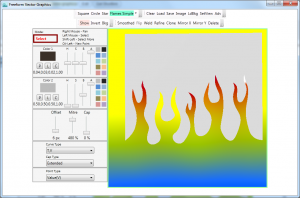 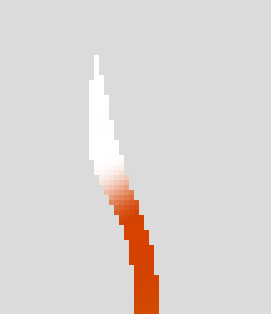 The rendering results provided here by the authors are quite impressive, and show that the proposed approach could be an interesting tool for graphics artists. However, I noticed a few artifacts which I think are worth mentioning.

In the following image (and in the following closeup), you can see that in some cases, the rendering of sharp features produces a black pixel. I think this is a problem that the pixel gets “pinched off” at the coarsest resolution when the direct solver is called. No equation except the regularization term apply to this pixel, which leads to a black pixel. This pixel cannot be ‘fixed’ by the flood fill algorithm as it is not a ‘undefined’ pixel. 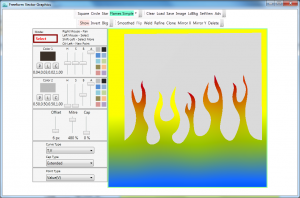 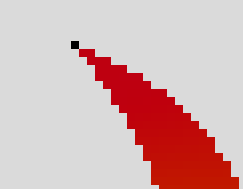 As described in the paper, the software “uses two solution modes: a faster one used for interactions like control point dragging and image panning […], and a slower one invoked after UI button-release”. The left image below shows the rendering of the cup example during a drag operation. It should be compared with the final result (right image) and as can be seen, the image quality is poorer during the drag operation. 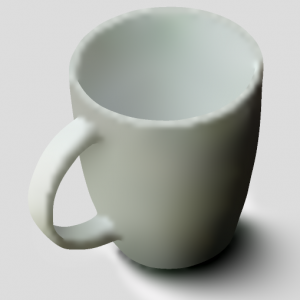 But another effect is noticeable during the drag operation. Some weird color artifacts appear, but they are different from frame to frame. This can be seen on this video. This seems to indicate a lack of stability of the fast rendering mode. Fortunately, these artifacts disappear when the mouse is released, as can be seen at the end of the video.

However in some cases, even after the button is released, the result is not the expected one. The following images show 3 different rendering of the flames example, with the same settings, the only difference is the position of the features. You can notice that the 3rd flame is rendered differently. I don’t have a definite explanation, but my guess is that, at this resolution, the value points located in the flames are too close to the the border and the rasterization of the features proposed in the approach has some problems. 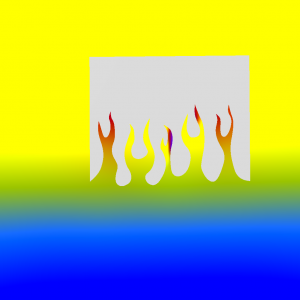 The paper indicates that the “goal is to support a virtual canvas of infinite extent” and that a window which contains all the features “applies ‘natural’ boundary conditions, equivalent to a tear curve circumbscribing the entire boundary”. I noticed some strange artifacts of this approach, as depicted in the following images. The right most flame at the image border shows a different color depending on how much of the flame is in the image. It gets more yellow or more red/orange. 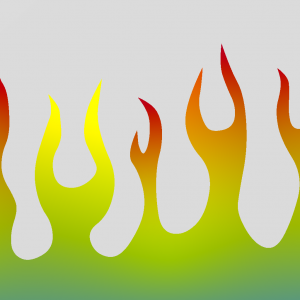 One thought on “Experimenting with Freeform Vector Graphics”